The German manufacturer Vileda specialised in household cleaning products, standing out for their quality and results. Now, in order to renew itself, it has also wanted to enter the field of robotics, with its own robot vacuum cleaners. One one of the best models is the Vileda VR 102.which also has a very attractive price.

It incorporates all the features you'd expect from a robot vacuum cleaner and for less than 150 euros. Few can compete with the quality and performance of this robot in the same price range. 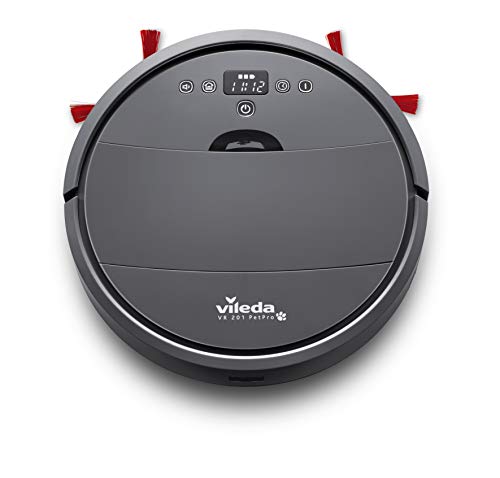 Sections of the article

Vileda has opted, like the vast majority, to use a plastic housing for your robot, which makes it lighter. In addition, it has a fairly good assembly and quality of finishes, making it a robust and durable product.

Regarding its designIt has not gone too far from the aesthetics that already seems standard in terms of robot vacuum cleaners, but the truth is that it has a look that is not at all unpleasant to have it hidden at home.

The Vileda Robot 102 has arrived to improve on its VR 100 and VR 101 siblings, with a round design as opposed to the square design of the previous two and a larger tank inside. It now features 0.5 litre capacity in its dirt tank, instead of the 0.37 litres of the previous models.

This deposit will allow collect a large amount of dirt without the need for constant emptying after each use as with other low-capacity robots, and of course, you won't need to replace bags.

Technical features and functions of the Vileda VR 102

It is also worth noting that the Vileda RV 102 Robot has some functions and features that should be emphasized, such as:

Advantages and disadvantages of the Vileda VR 102 robot

As with all products, it also has its disadvantagessuch as:

Maintenance and frequent problems with the Vileda VR 102

This Vileda VR 102 robot vacuum cleaner features a instruction manual very complete and in Spanish, to know everything you need before using this robot, or to solve problems in case they occur.

The Vileda VR 102 Robot Vacuum Cleaner may have certain problems, which are described in the user manual. To indicate that there is something wrong with it you have two LED lights that act as indicators of failures. The most frequent are:

Contents of the box

When you buy the Vileda VR 102, in the box will come everything you need to put it to work. That is to say:

The Vileda VR 102 can be a great robot vacuum cleaner if you're looking for something affordable and reliablewith a major brand behind it. In addition, you will be able to find spare or replacement parts easily. With a pretty good technical service to solve the problems in case they occur.

It is a very simple robot, but it does its job and does it in a very reliable way.. In short, if you decide to buy this robot, it is designed by a great brand, and with some advantages difficult to find in robots of this price range.

How much do you want to spend on the vacuum cleaner?

We show you the best options for your budget


*Move the slider to change the price.

Write to us at